​The Paul Thompson Trio represents three generations of jazz music from one of America’s centers of the art form. Combining original music and standard repertoire, the trio focuses on creating a new sound while firmly embodying the traditions of Jazz. Each member of the group has extensive performing credits in Pittsburgh and around the country while continuing to play alongside the abundant Jazz community in our city. Jazz past meets present meets future. 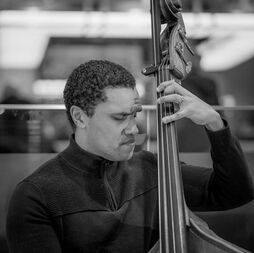 Paul Thompson has been playing bass professionally for over 30 years, including recording and touring stints with trumpeter Maynard Ferguson and saxophonist Stanley Turrentine.  Recent playing credits include Hubert Laws, Micheal Feinstein, and Bob James, among others.  Currently, he can be seen playing around the Pittsburgh area with Salsamba!, THOTH Trio, the Pittsburgh Jazz Orchestra, or with some of the city's rich Jazz community.  Paul currently teaches Jazz Bass at Duquesne University and West Virginia University and his alma mater, Pittsburgh CAPA 6-12 Performing Arts School. 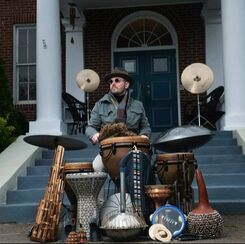 ​George Heid III is a drummer, percussionist, and composer whose diverse musical passions range from jazz, funk and classical to world and electronic genres.

George grew up in his father’s recording studio and began playing drums and piano at age 3. In this environment, he was always immersed in music and surrounded by powerful musical influences, such as jazz guitarist Jimmy Ponder and his uncle Bill Heid, a world-class pianist and Hammond B3 jazz musician.

George’s earliest studies took place at the Afro American Music Institute where he studied with drumming greats Thomas Wendt and James Johnson III. Later George would graduate from Pittsburgh’s Creative and Performing Arts high school, where he was mentored by jazz drumming legend Roger Humphries. After high school, he studied at Pittsburgh’s Duquesne University as well as at State University of New York: Purchase, where he studied with master jazz drummers Kenny Washington, John Riley and Richie Morales.

George is the recipient of numerous awards as both a performer and composer, including the 2013 ASCAP Young Jazz Composer Award, Downbeat magazine’s 2013 Best Original Jazz Composition award, and back-to-back Outstanding Soloist awards at the Monterey Next Generation Jazz Festival awards in 2011 and 2012. 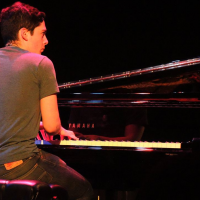 Antonio Croes is a jazz pianist local to the Pittsburgh area.  He studies privately with Bill Tobin and studied at Duquesne from 2015 to 2019.  Antonio performs throughout the Pittsburgh area, playing regularly with the finest musicians in the city.  He can be seen regularly performing with George Heid III, the Boilermaker Jazz Band, and many other groups and configurations.
​ 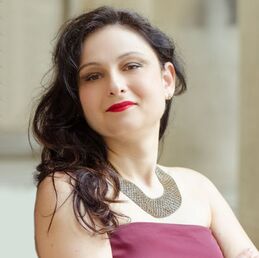 Cellist Katya Janpoladyan - Born and raised in Armenia, Ms. Janpolayan is a performer whose talents and musical passion extend beyond the stage. Audiences throughout the world have enjoyed her numerous studio albums, countless national and international performances and live radio appearances. Ms. Janpoladyan is equally driven as an entrepreneur and pedagogue, spearheading several successful chamber music programs and preparing award-winning cello students for their lives in music. Her teaching prowess has garnered international demand and she has taught masterclasses in the U.S., China and Chile.

Ms. Janpoladyan is the founder, Executive Director and cellist of Kassia Ensemble, a non-profit organization. Kassia Ensemble is a chamber music group comprised exclusively of women which promotes women’s contribution to classical music.

Ms. Janpoladyan’s mission to serve the social justice continues to serve Pittsburgh, where she created and is directing the PERSPECTIVES Festival of Chamber Music, created to amplify voices of musicians of color, scheduled to launch in June of 2022
​
Ms. Janpoladyan has also created programs to serve aspiring musicians in the Pittsburgh area. She founded the Pittsburgh Youth Concert Orchestra’s Summer Chamber Music Seminar and has served as its Artistic Director since its inception in 2016.

An active performer, Ms. Janpoladyan is a former member of the award-winning SHELL Piano Trio of Armenia and a former member of the Baur String Quartet. In 2001, while she was a member of SHELL, the quartet won the 2001 Pierre Lantier International Chamber Music Competition in Paris France. Ms. Janpoladyan has collaborated with artists such as Cyrus Forough, James Dunham, Yehuda Hanani, Ross Harbaugh, Awadagin Pratt, Piotr Milewsky and the Montclair Quartet. She has been featured as a soloist performing with the Yerevan Chamber Orchestra, the Camerata San Marco (NY), and the Mary Miller Dance Company. She has been a featured performer with the Opera Theater of Pittsburgh, was a cellist in residence with the Charlotte New Music Festival. Ms. Janpoladyan can be heard on albums “Reverie”, “Presence” “Songs from the Lake Volta” and frequently on the Classical WQED Pittsburgh.

She is currently residing in Pittsburgh, Pennsylvania with her daughter, Maria, fiancé Patrick, mom Anna and dog Beezus. 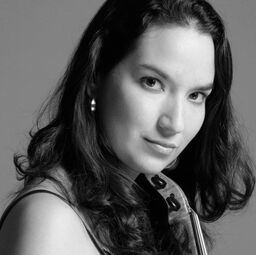 A native of Mexico, Maureen Conlon Gutiérrez has performed to much acclaim across the globe as soloist, chamber musician, and orchestral player. She has participated on half a dozen recordings as a classical artist, cross genre violinist, light rock improv and tango violinist. Miss Conlon has appeared on television and radio in several countries and is prize winner of many national and international competitions in both the United States and in Mexico.

An ardent chamber musician, she co-founded the Trio Nova Mundi with whom she performed across the Americas and appeared as soloist with various orchestras. In addition, she is member of the Argentine tango group AquiTango, and co-founder of string quartet Hot Metal Strings.

As an orchestral player she is concertmaster of the Johnstown Symphony Orchestra and is member of the Pittsburgh Opera Orchestra, the Pittsburgh Ballet Theatre Orchestra, the Chamber Orchestra of Pittsburgh, Resonance Orchestra, and the Wheeling Symphony. Miss Conlon has served as concertmaster of the Erie Chamber Orchestra from 2013-2018, as first violin and acting concertmaster of the Erie Philharmonic since 2008 and played with many orchestras such as the Pittsburgh Symphony, National Philharmonic, Sphinx Virtuosi, Akron Symphony, Virginia Symphony, and Sphinx Symphony.
​
A passionate educator, she served as Adjunct Professor of Violin/Viola at Grove City College from 2012-2017 and as Violin Professor at Duquesne University’s City Music Center during the 2014-15 school year. Her students have won awards, auditions, and competitions locally and have gone on to pursue music professionally. Miss Conlon is frequently invited to teach masterclasses at various music festivals, schools, and institutions both in the U.S. and abroad.
She resides in Pittsburgh, PA with her husband and daughter. When not playing the violin, she enjoys eating good food, watching movies, and traveling. ​ 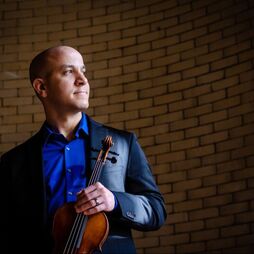 “This violinist shines, displaying virtuosity...his violin sings through musical storytelling... expressive playing...” – Pittsburgh in the Round.

Cuban-born violinist Sandro Leal-Santiesteban made his professional debut at age thirteen as second violin in the Grand Theater of Havana’s orchestra, where he performed numerous Spanish operettas and zarzuelas. During his teenage years, Mr. Leal-Santiesteban gave frequent recitals in Havana’s most prestigious halls, including the García Lorca Hall, the Teatro Nacional de Cuba, and the Amadeo Roldán Theatre. His most notable performances while in Cuba were playing the Khachaturian violin concerto at age fifteen with the Matanzas Symphony Orchestra, under the baton of his mother, Lourdes Santiesteban, and a performance of Zigeunerweisen by Sarasate with the former conductor of the Gustav Mahler Youth Symphony Orchestra, Claudio Abbado in attendance.

A year later, he was appointed associate principal second violin of the Matanzas Symphony Orchestra which took him on a European tour to the Graz Opera House in Austria and Spain performing Porgy and Bess by George Gershwin. Mr. Leal-Santiesteban has gone on to win several competitions, such as the Manuel Saumell Municipal Violin Competition, and the Amadeo Roldán National Competition, both in Havana, Cuba. While in the States, he has also been the winner of violin competitions: the Carnegie Mellon University Concerto Competition where he performed the Behzad Ranjbaran violin concerto at Soldiers and Sailors Hall, as well as the Pittsburgh Concert Society both as a soloist and as a member of the Beo String Quartet.

An alumnus of the acclaimed Sphinx Competition for African-Americans and Latinos in Detroit, MI, Mr. Leal-Santiesteban toured nationally with the Sphinx Virtuosi, most recently in 2021, taking him as far as the world renowned Carnegie Music Hall in New York City to rave reviews from the New York Times. As a member of the Beo String Quartet, Mr. Leal-Santiesteban premiered numerous works by established and emerging new music composers at the Charlotte New Music Festival in North Carolina (CNMF). In his time with the quartet, Mr. Leal-Santiesteban participated in residencies, recordings, and performances, including the Dakota Chamber Music at Minot State where he collaborated with members of the Grammy-award winning ensemble the Ying Quartet, residencies at Virginia Tech University, the Charleston Ballet in West Virginia, the University of North Carolina at Greensboro, the CNMF, and the International Competition Franz Schubert and Modern Music in Graz, Austria. Mr. Leal-Santiesteban has performed worldwide with critically renowned conductors and artists including Kent Nagano, Carlos Miguel Prieto, Robert Page, Benjamin Zander, Josh Groban, Clay Aiken, Evanescence, Bruce Springsteen, and Andrea Bocelli.

​He has been featured countless times on Pittsburgh’s Classical WQED-FM 89.3. His appearances include solos with the Erie Philharmonic in Tchaikovsky’s Swan Lake Op. 20 and “Winter” from Vivaldi’s Four Seasons with Resonance Works | Pittsburgh. During the 2018-2019 season, Resonance Works featured Mr. Leal-Santiesteban as soloist in December of 2018 in Vivaldi’s Concerto for Four Violins in B Minor, Op. 3 No. 10 RV 580, which was a live broadcast on WQED. In May 2019, he returned to Resonance Works as soloist to perform Leonard Bernstein’s Serenade after Plato’s “Symposium,” commemorating “Bernstein at 100.” Mr. Leal-Santiesteban currently keeps a very busy schedule performing and teaching privately in the Pittsburgh area. He holds the associate concertmaster position of the Erie Philharmonic. He lives in Pittsburgh, PA, with his wife Emily and his son Rafael. 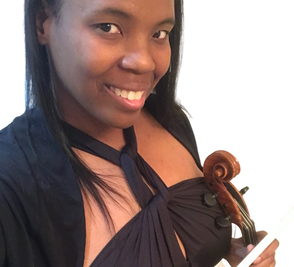 Experience the evolution of sound and turn your intuitive talent into a superpower with violist, Kai Potts-Smith, founder of VIOL∀ibrational by Kai and YOUnison Yoga & Music. Kai’s on a mission to open up new avenues of expression, connection, and abundance in the music world and inspire audiences to look at music in a new light… one that heals and transforms on a more personal and lasting level.  Her signature modality, The VIOL∀ibrational Method, integrates fitness, food, and frequency into a powerful therapeutic tool that’s helping musicians and change-makers around the world live lives full of purpose, find balance and deep relaxation, and achieve new levels of exhilaration as they embrace and OWN their radically authentic selves.

Kai is an international competition winner, Sphinx Competition First Place Laureate and touring artist, and has shared the world stage with performers from Celine Dion to Itzhak Pearlman. She has worked extensively in tv, film, and the recording industries, performed as soloist with orchestras throughout the US, served as Assistant Principal for the Hollywood Bowl Orchestra and The Santa Barbara Symphony among other principal positions, and has performed and toured with classical orchestras worldwide.

VIOL∀ibrational Method classes, courses, and programs marry musical and vibrational awareness to help practitioners melt into a state of “within-ness”, healing, and release that resonates throughout the entire body. She's been engaged to teach VIOL∀ibrational workshops for musicians at educational institutions like the Idyllwild Arts Academy, youth orchestras in DC and Los Angeles, and multiple performing ensembles throughout the US. These workshops are designed to help heal the whole musician so you can begin to create engaged communities, step into your business savvy, and get on the road to living, breathing, and making art on YOUR terms.

Kai is determined to bring the best of all of her worlds together to inspire all to redefine deliciousness, tap into your highest frequency, and embrace a balanced life centered in self-love. Let’s meet on the mat and the worldwide stage to breathe deeper, live deliciously, and OWN the BIZ of 7-Figure Soul Medicine.